The Local Food of Fukui

This may be a simple dish of grated daikon (horse radish) on top of soba (buckwheat noodles) but it is known for its deep flavor and has recently received attention as a macrobiotic meal.

It is said that Echizen Oroshi Soba Noodles began in 1601, when Gonzaemon Kaneko, a soba master was appointed to move to Fuchu (now the town of Echizen) along with Lord Tomimasa Honda when he was transferred to the castle there, Gonzaemon brought the way to enjoy soba with grated daikon. Buckwheat in Fukui is known for its small granules and the thin skin on the kernels. When the buckwheat is ground with a millstone, the outer skin is ground as well and it turns the colour of soba to be black. 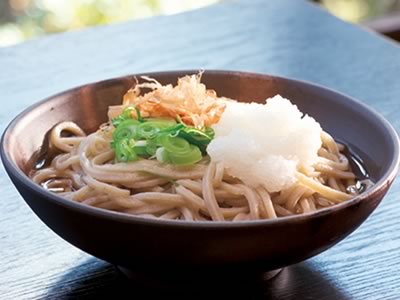 Sauce katsu on rice in Fukui is a dish made simply by dipping the katsu (deep-fried pork chop) in a Worcestershire sauce-based sauce and placing the sauce-covered katsu on hot rice with the sauce.

Mr Takahata in Fukui city, who keeps authentic flavor of the original Sauce Katsu-don Pork Cutlet Bowl recipe, says that the dish was originally created by his grandfather in the Taisho era.

If you try even just one mouthful of the soft katsu and taste mellow, sweet and sour flavor of the sauce, you will never forget this dish! 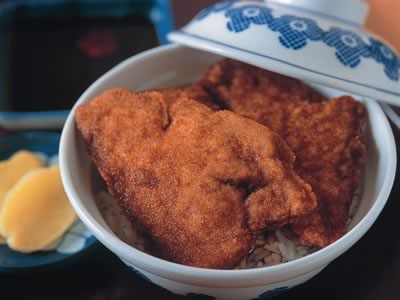 Seiko-don (the area from Mikuni to the Echizen coast)

This dish is made with freshly cooked rice topped with the fresh, the colorful unfertilized eggs and the richly flavored fertilized eggs of the female Echizen snow crab. This is then covered with a soup made from the crab's innards.

Author Takeshi Kaiko, a winner of the Akutagawa prize, described this much-loved dish as "the treasure box of the sea". The "Kaiko-don" is a famous original dish of traditional Japanese inns. 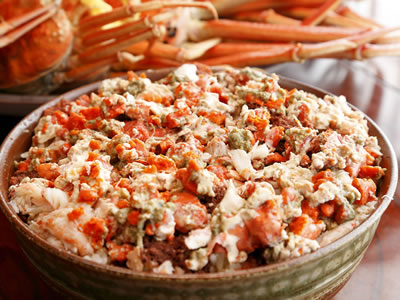 "Kyoto is only 18 li (about 70 kilometers) away!"
In the olden days, various seafood from Wakasa Bay was transported to then capital of Japan, Kyoto via the Wakasa Road (also known as the "Mackerel Road"). These seafood supported the diet of Kyoto, and Fukui was known and called as "Miketsukuni", a much-blessed food-producing country.

Mackerel is a well-known product from Wakasa, arriving via Wakasa Bay. However as mackerel spoils more quickly than other seafood, it used to be gutted and grilled by the seashore to preserve it for its trip to Kyoto.

The Hamayakisaba Grilled Marckerel found in Obama city is especially famous throughout Japan. The fatty mackerel are perfectly grilled as whole and usually eaten with ginger and soy sauce. The grilling takes about 15-20 minutes. To ensure the fish is cooked evenly, it is slit in certain places and close attention is paid to its color and how much fat cooks out of it while it is grilled. As it is delicious freshly grilled as well as it gets cold, Obama's Hamayakisaba Grilled Marckerel is a popular souvenir choice for travellers from other prefectures. 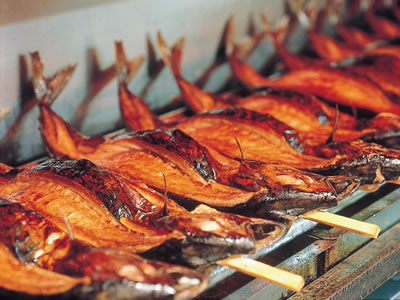 Volga rice has been around in the Takefu region of Echizen city since the Showa era. It is a popular dish comprised of katsu (deep-fried pork chop) on top of omelette-wrapped rice coated in a special sauce.

Despite no specific birthplace or story behind the name of this dish are revealed, its flavour is well-know and the locals are familiar with it. Served at 15 restaurants currently, there are many variety of its arrangements available such as standard style, Chinese-style and stick-style that you can enjoy as "to go". This colorful meal will whet your appetite at a glance. 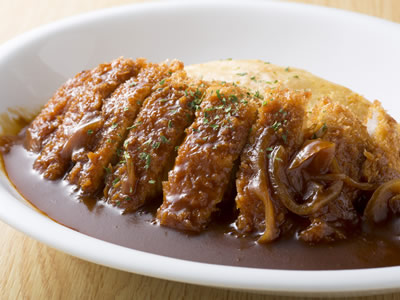 In 2010, a soy sauce for use on katsu-don (deep-fried pork chop on rice) was created in Ono city by Akeshi Nomura, 6th cheif of the Nomura Soy Sauce Storehouse which sauce was well-used at famous local temple, Daihonzan-Eihei Temple and katsu-don-crazy prefecture, Fukui welcomed a new-styled katsu-don; Soy Sauce Katsu-don Pork Cutlet Bowl. 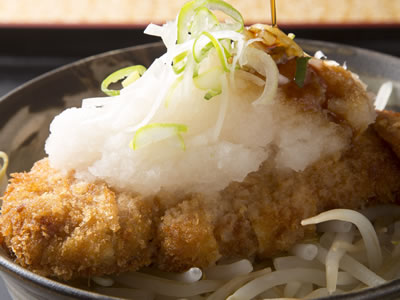 Representative of Fukui's traditional Japanese set meals (Wazen), Asakurazen is prepared with care by local women and its two courses contain 12-13 dishes which are enjoyed by visitors to the prefecture. Due to the time needed in preparation, bookings are essential a week in advance, and for 10 or more people to eat this very traditional meal. 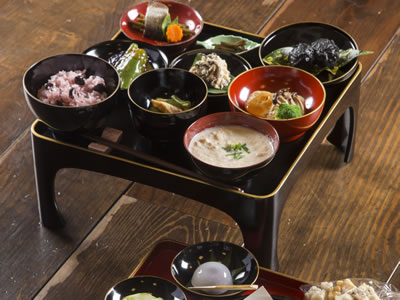 Created in 2013, the Wakasa Road Seafood Set is a hearty lunch dish containing the abundance ingredients from the oceans, lands and mountains that can be found around the Wakasa Road area, Reinan region in Fukui. The dish can be enjoyed with various other sytles, such as a Japanese set meal, bowl with rice or with noodles.

One option is the Wakasaji Donburi Seafood Rice Bowl made with fresh seafood from Wakasa Bay. Nearly 30 restaurants offer the meal with their own unique arrangement on the dish in which you can enjoy the delicious local fresh fish that represents the region. 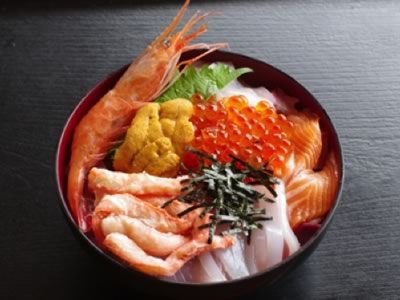