The Local Food of Hiroshima

Tantanmen noodle is well known throughout Japan, and  “shiru-nashi”- without soup is the popular style in its birthplace of Sichuan, China.  Added to spiciness from red peppers, Sichuan pepper seasoning gives it extreme spiciness.  Some restaurants offer the noodle with mince and green spring onions and topped with celery, Chinese cabbage and a poached egg.

More and more restaurants started offering the noodle over the past decade in Hiroshima, and now there are more than 30 specialised Tantanmen noodle restaurants within Hiroshima city alone.  It is eaten “Hiroshima-style”, by mixing the noodles, ingredients and sauce together, and when you finished the noodle, it is recommended to enjoy any leftover sauce with rice. 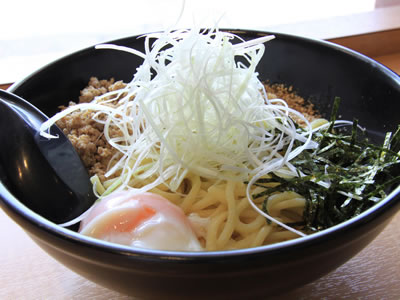 Many corps of the Japan Maritime Self-Defence Force (Kaijo-Jietai) eat Curry every Fridays for lunch.  It is said that by eating same lunch every week, it can prevent Seamen who are out at sea for long periods of time from losing sense of days of the week.  For any curry, the chefs use their creativity to come up with a healthy dish, which only members of the Maritime Self-Defence Force can taste.

“Kure Kaiji Curry” was originally offered only at the Military vessel which belongs to the Maritime Self-Defence Force Kure-Base for its members, but is now offered at local restaurants in Kure city for public. Each of these establishments have been directly taught how to cook the dish by Maritime Self-Defence Force chefs, and restaurant chefs are able to faithfully recreate the original dish. 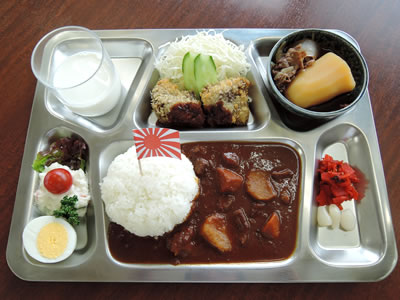 Mihara is one of the Seto Inland Sea’s prominent common octopus producing regions.  Although it is located within the Seto Inland Sea which is known to have calm water flow, Offshore of Mito has very strong current. In this environment, the small fat legs of the Mihara octopus, which they use to desperately cling on to rocks are developed. As you chew, you will enjoy the texture of the tight consistency.

As Octopuses have thrived in Mihara since long ago with a tradition of octopus fishing, the city has been pursuing to develop the most delicious octopus cuisine.  From full course meals starting with octopus sashimi or octopus rice, to okonomiyaki (Japanese pancake), noodle cuisine and sweets, you can enjoy varieties of octopus cuisine in Mihara. 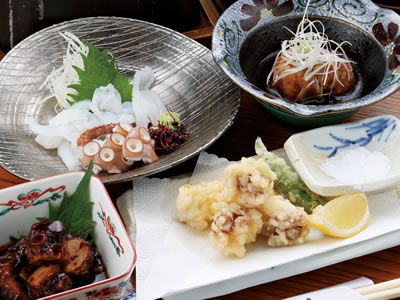 “Where are all the ingredients?”
Despite how it looks, this is an amazing dish.  Soup stock neatly cooked with dried sardines from the Seto Inland Sea and the “fortunes”- ingredients from the surrounding sea and mountains are buried (“uzumi”) in Fukuyama rice, and this is from where the name “uzumi-gohan” is derived.

This local cuisine said to be originated from hiding ingredients which are considered to be luxurious such as chicken and prawns under the rice due to the strong pressure to live frugality from then government in the Edo period.

The joy of tasting the delicious seasonal ingredients with feeling of excitement of treasure hunting, you can literally dig out the seasonal fortunes! In the port of Tomonoura located along the centre of the coast of the Seto Inland Sea in Fukuyama, Tai (red seabream) come for spawning grounds every year around May. The fish in this time are called “sakura-dai” (cherry anthias), and their fatty meat is especially delicious.  Such fish are often used in “Fukuyama Tai Uzumi” which provide an abundance of delicious flavour, and are representative of “uzumi”.

Please don’t hesitate to try “Fukuyama Uzumi-Gohan” when you visit Fukuyama next time!

Bingo Fuchu-Yaki is okonomiyaki (Japanese pancake) made from mince, which has been continuously loved in Fuchu since long ago.

This dish is said to be originated during period of post-World War 2 rapid economic growth in Japan.  As there were many prosperous and dual income households in the industrial city of Fuchu, inexpensive and flavoursome Oyaki(other style of Japanese pancake) with mince was popular for children’s snacks and for elderlies’ dinner.

The people of Fuchu are said to be “raised with okonomiyaki”, and each household had its own “favourite Okonomiyaki shop” and was ideal to stop for lunch or light meal during work breaks or when just a little hungry.

Having said these, Bingo Fuchu-Yaki is not just a food to eat to fill you up – rather the people of Fuchu see it as an important soul food and passing onto generations.

Once fried, the fat in the mince gives it a “crunchy” outside, and a “tender” inside.

With its attractive moderate price, about 40 okonomiyaki restaurants in Fuchu City are currently serving this dish. 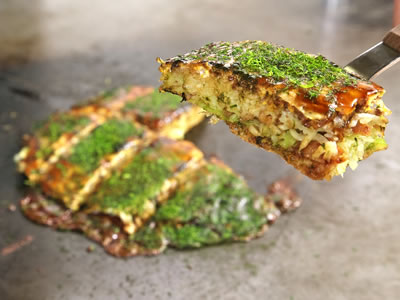 “Wani” is actually the Japanese word for crocodile, but in the Miyoshi region it means shark (“same” in Japanese).  Wani is a popular local cuisine in the mountainous region of Miyoshi City in Hiroshima Prefecture.

Wani meat can preserve its freshness for a relatively long time therefore people in Miyoshi City, the mountainous region has valued it for a long time. The best season for eating wani is from autumn to winter when the meat is firm, and is enjoyed over the New Year period as a celebratory food.

It is served in a variety of ways including raw, fried or the most popular way being sashimi as the meat is soft texture and light flavour.  Nowadays, not only those traditional sashimi to enjoy, but also using it in creative ways such as wani burgers or popular sweets with wani such as cream caramel or shortbread are also popular. 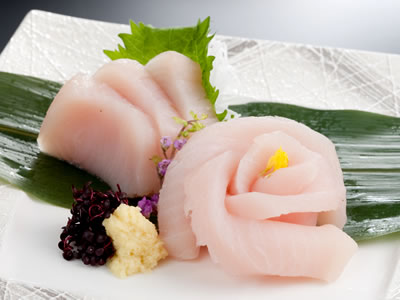 Saijo in Higashi Hiroshima city is well-known as a brewing region alongside Nada (Hyogo) and Fushimi (Kyoto) and has been thriving with Sake brewing.  Bishu-Nabe(Sake Hotpot) was originaly a popular staff meal among sake breweries workers in Saijo.

The hotpot is seasoned simply with salt, pepper and Japanese sake only to prevent the workers from having any problems with Sake tasting even if they were eating it during meal breaks. The name of “bisho-nabe” is said to be originated from the brewery workers who were referred as “bisho” as they often get soaked (“bisho” in Japanes) during the work. And the food that “Bisho” ate became to be called “bisho-nabe”.  The word “bisho” has nowadays come to be pronounced “bishu”, using the Japanese characters for ‘beautiful’ and ‘sake’.

Although a lot of sake is used in “Bishu-Nabe”, those who don’t drink alcohol as well as children can enjoy this wonderful dish, because the alcohol content disappears in the cooking process with leaving the delicious flavour of the sake. 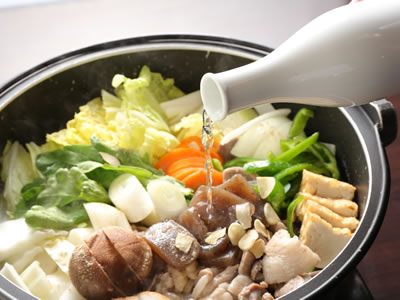 A local dish of Miyajima in Hatsukaichi City, Anago-meshi consists of grilled conger eel firmly laid on a bed of steamed rice, with the release of the delicious flavour of the firm fat of the eel.  Anago-meshi has been enjoyed as “eki-ben” (boxed lunch available at train stations) since the Meiji period, and is well-known throughout Japan as a famous dish of Miyajima.  The boxed conger eel lunch has awarded number one “eki-ben” in Japan and is a sought-after dish all over Japan.

Even nowadays, there is great competition among restaurants in Miyajima and neighbouring regions with each of their own unique secret sauces used in Anago-meshi and other bowl meals.  It is of course delicious while it is freshly cooked and hot, but even after it gets cold, the strong delicious flavour will be brought out to your mouth.  Anago sushi (conger eel sushi) is also delicious, and it is a “must” ingredient for local rolled Sushi.  It is highly recommended as a souvenir of Miyajima. 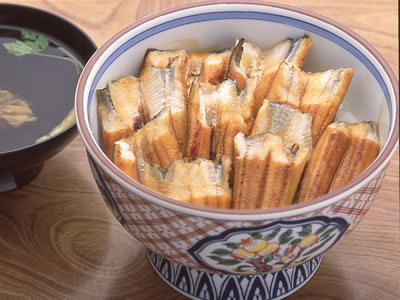 The dish is packed with seasonal crispy vegetables from the local region providing the addictive fragrance and flavour of pickles.

The beginning of “Tsukemono Yakisoba” dates back only three years, when the people of Matsubara area in Akiota-Machi entertained each other with the household dish “Yaki Tsukemono”.  The delicious flavour and interesting food culture caught the eyes of the young staff of the tourism association. The staff experimented with determination over the next two years by repeatedly trialled to provide it to public at events, etc.  After the final creative process by professional chefs, the B-Grade Gourmet “Tsukemono Yakisoba” finally began to be offered. 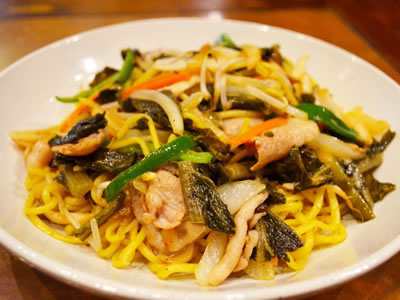 It is well-known that natural oysters have been eaten since the Jomon and Yayoi periods throughout the entire area of Hiroshima Port from the findings at the excavation of shell.  It is not clear when the people shifted the method towards breeding rather than natural, but some say a breeding law was implemented in the Muromachi period. Now Hiroshima has a long proud history of being number one producer of oysters in Japan, producing 60% in the total oyster share in Japan.

Oysters from Hiroshima are breeded in the rich enironment of the Seto Inland Sea, and have a tender thick meat which taste rich and sweet.  The oysters are straight off the boat and extraordinarily fresh, so can be eaten raw or even cooked, the meat retain its shape and do not shrink with a heat.  Therefore, they can be grilled in their shell, deep fried, or cooked in hotpot- a local Hiroshima cuisine.  More recently, oil marinated oyster has become a very popular souvenir.  Such various oyster cuisine represents the taste of Hiroshima in winter. 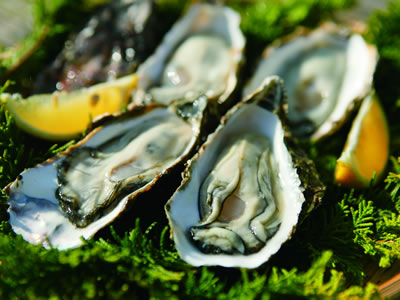