The Local Food of Kagawa

Synonymous with Kagawa are its sanuki udon noodles. Loved by locals from long ago, sanuki udon has been responsible for a number of “sanuki udon booms” and visitors on udon tours come from all over Japan. It has become somewhat of a tradition to see long lines of tourists waiting to eat udon on weekends and holidays.

It is said that the reason udon is so deeply rooted in Kagawa prefecture lies in the fact that the climate and the soil is perfect for the cultivation of flour. The prefecture has also flourished as a producer of products such as salt and soy sauce from long ago, and is the top producer of the dried sardines that are used as stock in the soup base.

As there are currently over 600 stores in Kagawa that offer udon, the dish is closely connected to the lifestyle of the residents. Kagawa is also Japan’s number one producer of boiled udon, raw udon and dried udon and the consumption of udon by residents of Kagawa sits at number one in Japan (at a level far above the next ranking prefecture). 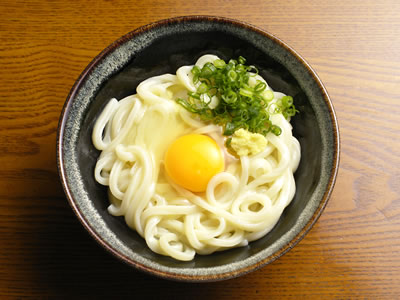 Marugame city is the birthplace of Kagawa’s chicken Maryland. It all started in 1952 when a married couple who ran a pub near the station saw an American movie where a people ate chicken straight off the bone. The story goes that, so influenced were the couple by watching people each chicken with such gusto, they wanted to give other people the chance to try it and so they began offering chicken Maryland.

The taste of the well-seasoned chicken with a crisp skin and juicy inside immediately took off in Marugame, and, one after another, stores began to include it in their menus and specialty stores popped up.

Nowadays stores all over Kagawa offer chicken Maryland and it has grown to become one of Kagawa’s best-known dishes. It is now a food deeply rooted in the prefecture, with long lines outside specialty stores appearing around Christmas time. 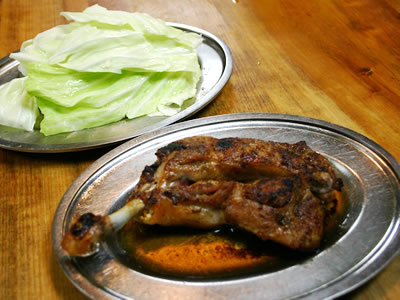 “Pippi” is a child’s word for “udon” that is still used today in Kagawa. “Sakaide pippi rice” is a type of typical home-cooked meal, and contains chopped udon noodles and ingredients such as pickled radish all fried up together.

The dish reproduces a nostalgic flavor and is made of whatever ingredients are available in homes in Sakaide. The dish came about as Sakaide was originally home to many noodle factories. and people in the Showa period (1920s to 1980s) would use their left over noodles mixed up with rice and whatever was left in their fridges to create this sort of meal. 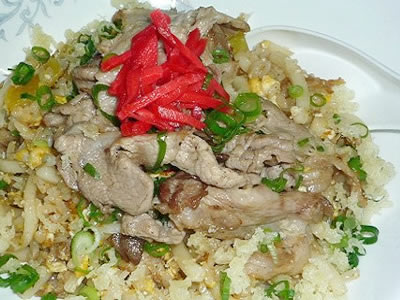 These fried sweet potato balls are made by mixing locally grown sweet potato and carrots and coating the mixture with Shodo Island somen noodles.

These delicious sweets with a crunchy exterior and warm potato on the inside are full of Sakide flavors - made and consumed locally. 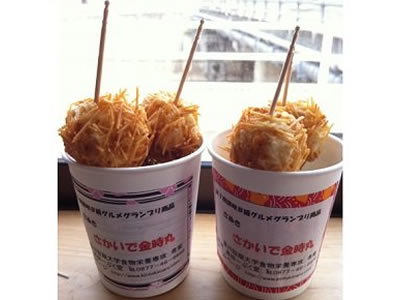 This dish came from an old butcher who started to make tripe hot pots for the workers of the old Japanese National Railway Tadotsu Carriage Factory (now the JR Shikoku factory). With udon added in at the end, “Tadotsu tripe and udon hot pot” now takes a place in the line-up of local delicacies.

The secret of this hot pot cooked on a soy sauce base with tripe and a variety of vegetables is the special dipping sauce made with ingredients including garlic and strong soy sauce. The flavors of the ingredients are infused in the udon and the meal is lighter than it looks. 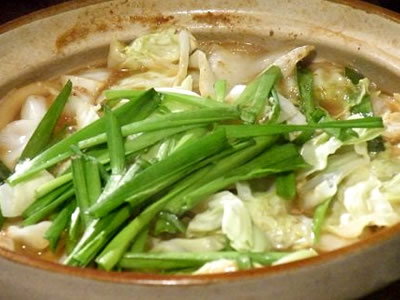 Hamachi (young yellowtail) is known as the fish of Kagawa prefecture. Hamachi’s name changes as it grows older, and as such the fish is used in dishes at celebrations and is much loved by the people of Kagawa for bringing good fortune.

Marinated Hamachi-don serves up fatty Hamachi steeped in a secret marinade on rice. The sweetness and umami of the fragrant Hamachi will fill your mouth as the fish melts on your tongue. The flavor of the marinade suits people who aren’t big fans of fish and is one that you will want to eat over and over again! 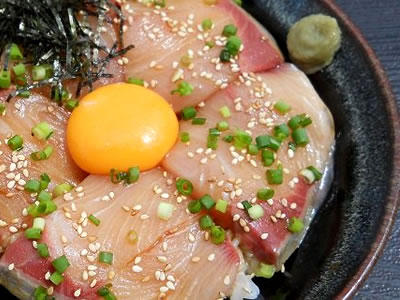 Shodo Island is one of the top four producers of soy sauce in Japan. With many factories producing fermenting mash, soy sauce, and soy sauce-flavored goods (often small sardines), the island is known as the “home of hishio” (seasoning). The hishio-don dish was created to spread the word about the legendary flavors produced here.

To be classified as “hishio-don” (don means “served on rice”), a dish must fill the three below requirements:
1. Use soy sauce or fermenting mash from the “home of hishio”
2. Be made with fish, vegetables or other ingredients sourced from Shodo Island
3. Side dishes to the rice bowl must be either olives or soy sauce-flavored dishes Tako-han was created to fulfill the dreams of children who asked for bigger “tako-yaki” (octopus balls). This original food is made using the ingredients for tako-yaki but fried in larger “imagawa-yaki” trays (imagawa-yaki is a sweet cake filled with bean paste).

To make tako-han, a liberal serving of the cabbage, octopus and egg used to make tako-yaki is slowly fried and served with plenty of sauce and mayonnaise. Tako-han cost in the 100 yen range and are big enough to satisfy even an adult - very reasonable! 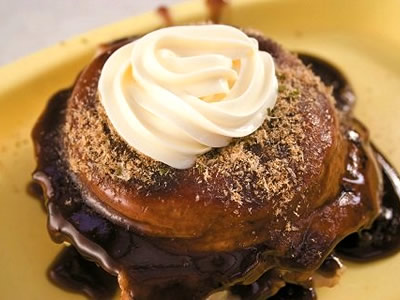 A novel menu item made using “sanuki udon” noodles as a hamburger filling. The hamburgers are only sold on weekends and holidays at Tsuda’s Matsuhara Service Area. The popular local hamburger is often sold out by lunchtime! 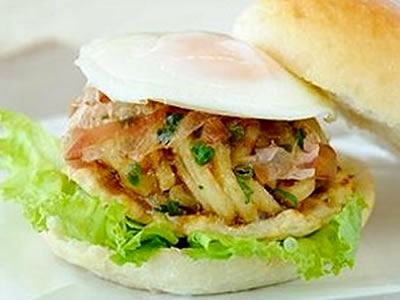