The Local Food of Kyoto

Mackerel pickled in rice bran paste made in the region stretching from Wakasa to Sanin.
The Japanese name for the dish "mackerel heshiko", comes from the word "to pickle" in the dialect of the area which is, "heshikomu".
In the past sardines were brought to shore in large numbers and were the staple of "heshiko", however in recent times mackerel is more common.
In Ine-cho families used to pickle their own fish, however nowadays most of the fish is pickled by fishing cooperatives. 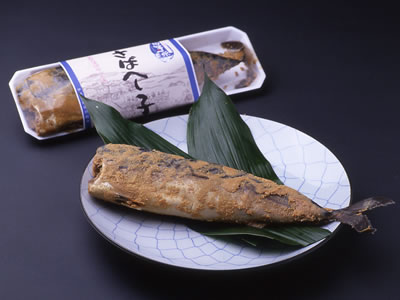 Ine-cho's main winter dish. The theory exists that the meal of yellowtail shabu shabu actually originated in Ine-cho.
In this moreish, must-try dish, fatty winter yellowtail (buri) is cooked shabu shabu style, blanched in boiling stock to remove the perfect amount of fat from the meat. 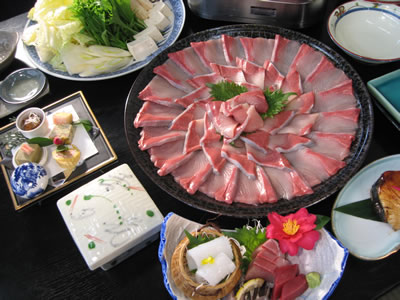 The clear, Yura River runs from Kyoto Tamba Kogen Quasi-National Park to Wakasa Bay and is one of the top 100 rivers where wild ayu (sweet fish) swim upstream. Diatom plants, which the fish feed on, are plentiful in the rocky areas that the Yura River passes through, and it is said that the fish become more flavorsome if they go upstream as far as the wild valleys of Yamagae in Ayabe City. Indeed, renowned ceramic artist Kitaoji Rosanin who also became a masterful restaurateur praised this ayu as being the "most delicious" and chose to eat it particularly.

These superb ayu banquets can be eaten in the restaurants of Ayabe City. A legacy of the mid-Meiji period (1868-1912) when means of transport were scarce and Ayabe City was buzzing with people from the creation of the Gunze corporation as well as the new religion "Oomoto", there are still many restaurants that are also Japanese inns where you can also stay.

The banquets are prepared in the unique Kyoto style of cooking based around seasonal ingredients, and along with the meal you can enjoy the history of the dish and the location, old-style restaurants, luxurious facilities and the hospitality of the owners. 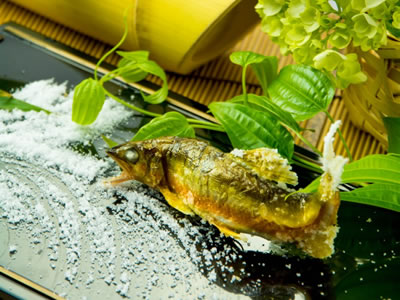 Kyoto's own brand of cockles.
Fishermen cultivate these cockles with care over the course of a year in a container filled with anthracite (a type of coal) placed in the inner bay.
Tango cockles were the first seafood item to be recognized as a "Kyoto brand" by the Kyoto Local Produce Cooperative in 2007. 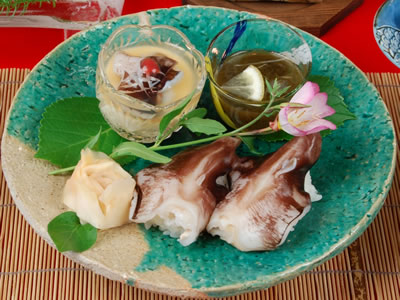 These are rice cakes that can be eaten at the teahouse by the main gate at Chionji temple, one of Japan's three sites for the Monju Bodhisattva of wisdom and intellect. It is said that in 1690 permission was received from the temple to establish a store.

In the Kamakura period (1185-1333) an old lady who lived in Amanohashidate had a dream where a statue of the Monju Bodhisattva told her to pound rice cakes and serve them to the people. While she was giving them out, a senior priest from the Daitokuji temple saw a smart child eating them, and said that his intellect could be attributed to the wisdom imparted by Monju Bodhisattva. In this way, the rice cakes become known as "rice cakes of wisdom". 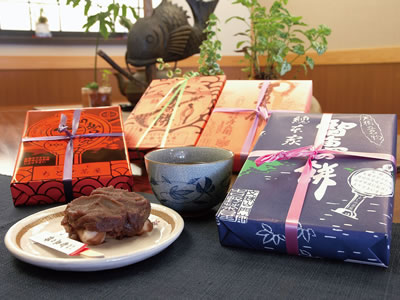 Tango mixed sushi is known for its use of minced mackerel. A layer of rice is pressed into a shallow pine box and topped with a colorful mixture of sweet and spicy boiled mackerel mince and toppings including strips of omelet, red pickled ginger, fish sticks and shiitake mushrooms. In a style unique to Tango, the layer of rice and topping is then cut into pieces.

In the Tango region the mixed sushi dishes have certain common features but the shape, flavor and the ingredients have some variations. For example, being cut in square or circular pieces, or the dish sometimes being made with two layers of rice and topping instead of one. Different restaurants and households also have individual variations on the ingredients they use.

In the Tango area the dish used to be made at festivals but it has became a familiar local flavor associated with formal occasions such as new year, obon, birthdays or gatherings among relatives and friends.

Before WWII the dish was made with grilled mackerel as a type of preserved food but soon after the war it began to be made with tinned mackerel. It may be because of the large quantities of mackerel needed in the dish, but only in Tango can you find especially large tins of canned mackerel. 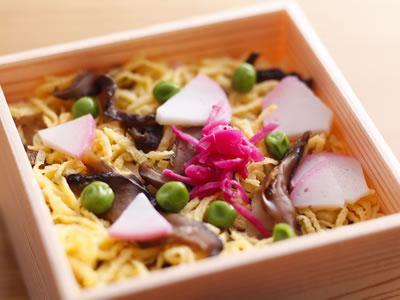 Because Taiza fishing port is only 2 or 3 hours from Taiza fishing grounds, daily fishing operations are possible. Perfectly fresh Taiza crab is delivered to port and is said to be top class in its quality and flavor. 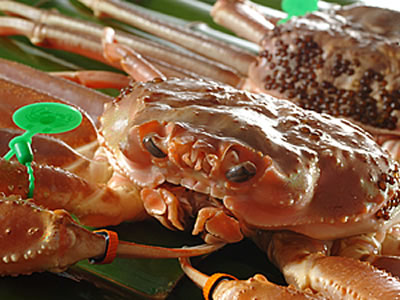 In 1901 Heihachiro Togo (Lieutenant General at the time) was appointed to be the Maizuru Navel Base's founding Commander-in-Chief. He could not forget the flavor of the beef stew he are while in English on exchange in his youth and so ordered his subordinate to make it as part of the meals aboard ship. This is said to be the beginning of the classic Japanese dish, "niku jaga" (beef, potatoes and onion).

With its high level of nutrition, the dish most likely spread as it worked to prevent the beri beri sickness that was rife among sailors at the time.

In that period in Japan, however, it was difficult to source the wine and butter needed for the English version of the stew, so it was made with soy sauce and sugar. This was the start of modern-day niku jaga (with a sweet flavor). 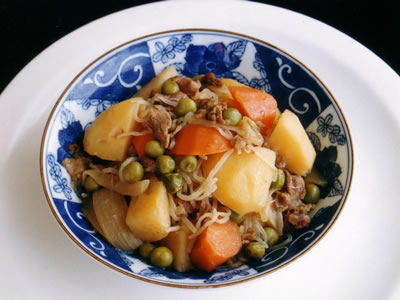 In the Yamato period (250-710) farmers who cultivated their own land were known as "Tabe" and it is said that rice cultivation in Japan originated with the red rice that these farmers grew. The knowledge of this elusive red rice had been handed down through folklore for its part in Shinto religious ceremonies but was resurrected by Miwachi in Yosano-cho in the Tabeso region as ancient Tango rice and today is once again used in religious rituals and celebrations. Noodles that bring out the flavor of that red rice were created and they were given the name of the region the rice was harvested from: "tabeso". 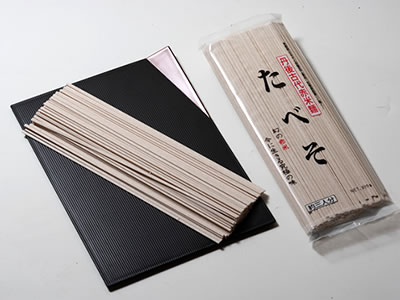 Gomu (rubber) yakisoba noodles started when the late owner of the Kobeyaki restaurant in Higashinakano in Fukuyama city, Mr. Kozaburo Nagai, recreated the noodles he had eaten during the war in Canton in China and began selling them as Haze noodles and Canton noodles. By double steaming in the manufacturing process, the noodles develop a unique color and a texture similar to rubber.

The fried noodles of Kobeyaki are prepared simply with pork belly, Canton noodles and bean sprouts. The restaurant menu had listed them as "yaki-soba" (fried soba noodles) however they became to be known as gomu yaki-soba, or rubber noodles, by their regular customers.

The noodles began at the Kobeyaki restaurant and although there were 15 stores offering Canton noodles in the 1980s, there are currently around 10.

At the end of September in 2011 the Fukuchiyama B-Grade Food Gomu Yaki-soba Promotional Committee was formed with four restaurants including Kobeyaki as recognized members.