The Local Food of Saitama

The origin of ramen is in Iwatsuki in Saitama city.  Tofu and a thick starchy sauce of minced beef is poured on top of the noodles in a soy sauce soup.  In contrast to Mabo Ramen, Tofu Ramen has a “refreshing” flavour.

While traditionally provided for staff at “Restaurant Ootemon”, it has been added to the menu and is now well known in the former city of Iwatsuki.  We are proud that our ramen has been a two-time winner of the “Saitama B-Kyu Local Gourmet Competition”. 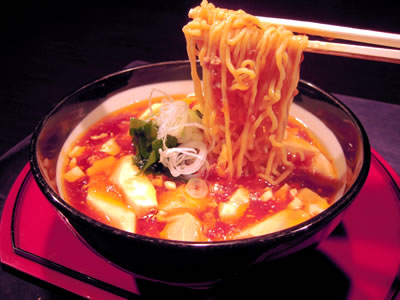 Miso potato can easily be made with standard potatoes which any household has.  The salty-sweet miso flavour suits the freshly baked and crunchy potato.

In Chichibu, it is standardly eaten as a side dish or snack.

Chichibu is also the home to “Kojuuhan”, a type of Japanese cuisine which is eaten in breaks between farm work when farmers are just a little hungry.  Each household has its own unique version of “Kojuuhan”, using local grains and other agricultural produce. 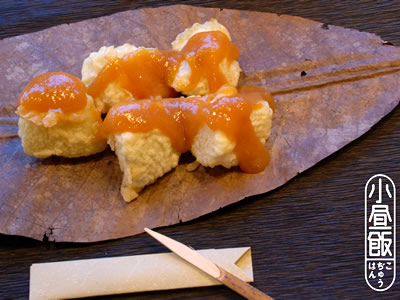 “Konosu Kawahaba cuisine” is the local cuisine named after the width (kawahaba) of the Arakawa River which runs through Konosu and Yoshimi and is the widest river in Japan.

The width of the Arakawa River is tens of metres wider than that of a normal river.  The Japanese Ministry of Land, Infrastructure, Transport and Tourism includes the bank and dry riverbed in its definition of river width.  Sixty-two kilometres upstream from the mouth of the river, from bank-to-bank, the width of the river is 2,537 metres, the largest width of any river in Japan.

“Konosu Kawahaba Udon”, which consists of udon of with a width of 8cm, was created in August 2009, and since then, not only have the number of restaurants selling Kawahaba Udon increased, but non-udon dishes are being further created. 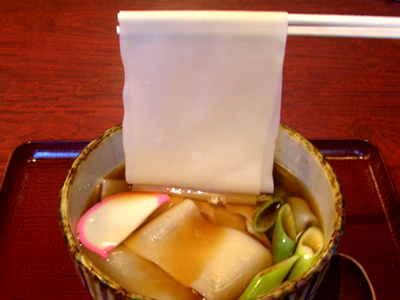 Tomatoes are used to colour the rice red, used in the curry itself, and also in the topping.  These three principles are requirements for tomato curry.  Naturally, maximising the use of tomatoes creates a sweet and acidic flavour that spreads throughout your mouth.

Kitamoto has continuously been producing tomatoes since the Taisho period, with “Ishito Tomatoes” being famous throughout Japan.  The varieties of tomato curry throughout the city are increasing, with attention being focused on future expansion. 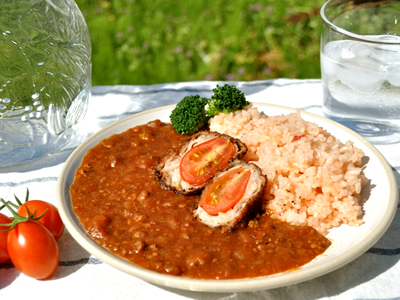 “Ni-Boto” is a local Fukaya cuisine full of creativity and knowledge specific to the region where it is relatively easy to get flour.

Its unique characteristic is the size of the noodles (about 2.5cm in width and 1.5mm in length), and comprises ingredients including specialty Fukaya spring onions and a variety of other locally grown vegetables.  The noodles are boiled from their raw state, and served with a moderately thick soup and flavoured with soy sauce, providing a standard Fukaya winter dish.

“Ni-Boto”, which was a loved dish of Eiichi Shibusawa, a Fukuy Fukaya a-born industrialist of the Meiji period, can be eaten in many eating establishments throughout the city.  If you pass through Fukaya, please come and try it!  The delicious flavour will warm both your heart and stomach. 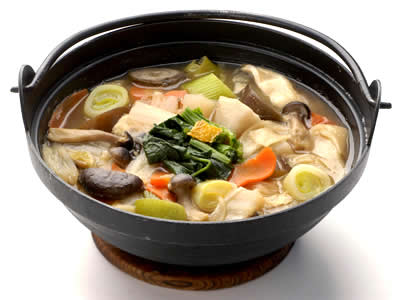 “Suttate” is a local cuisine which has been passed down through farming families of Kawajima for generations.

Suttate is typically made by grinding shiso (Asian herb), cucumber and Japanese ginger in a pestle and mortar, to which stock or water is added.  It is then used as a dipping sauce for udon.

Kawajima has been a rice-growing town since old times. Suttate was eaten by the farmers when they would take a short break in the sweltering summer heat under the blazing sun.  It was ideal as it was nutritional and easy to make. With the main ingredient being miso from soy beans, the dish is not only full of protein, but ideal for replacing the salt lost from your body through perspiration. The refreshing flavours of cucumber, shiso and Japanese ginger make it a very appetisingly cool dish. 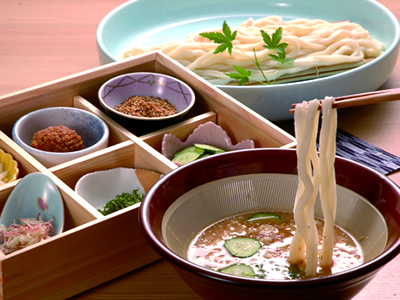 In old times when sericulture was popular, on the Lunar New Year (currently January 15), rice-flour balls and various types of citrus were threaded on wooden skewers and decorated with cocoon-shaped cakes to pray for a good harvest.  Every year the fields are full of ready-to-harvest wheat, and dumplings made of other varieties of flour, dumpling soup and udon came to be commonly eaten at home.

Nowadays with the popularisation of local production for local consumption, Hanno is making best use of local produce, and by adding some creativity to traditionally eaten cuisine, a wide variety of original cuisine of Japanese, Western, Chinese and ethnic dishes is being produced.  This is “Hanno Suiton”. 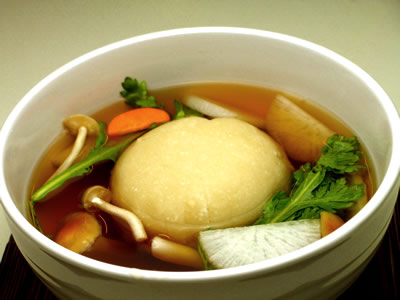 There were many wetlands around the Urawa area in the Edo period, and the riverside areas inhabited by many river fish were bustling with people enjoying fishing and other recreational activities.  The eels caught were sold to these people and it is said that they became known for their nice flavour, and travellers on the Nakasendo Road began went out of their way to stop by.

In the middle-half of the Taisho period, eels disappeared from the local area due to development.  But the traditional 200 year-old flavour of “unagi kabayaki” (grilled eel) has been inherited to the present day through the “Urawa Unagi Breeding Assocation”. 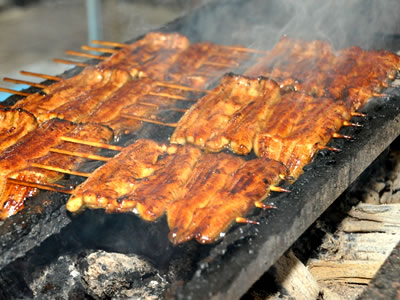 2016 represents the 1300-year anniversary of the creation of the Hidaka region.  The Hidaka dish of Koma-nabe was created by local volunteers who were trying to liven up the local area.

There are three requirements for making “Koma-nabe”.  Use kimchi, use locally grown vegetables, and use Koma carrots.  By following these rules, and using some creativity, many varieties of this dish can be made. 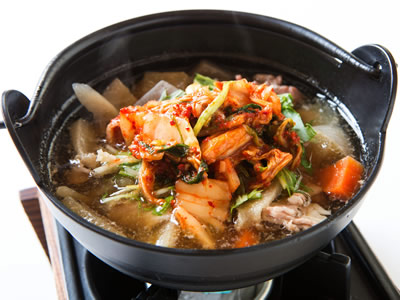 Jelly fries consist of a mixture of potato and okara (tofu dreg) prepared into oval-shaped patties and deep fried.  They are flavoured with sauce.  Similar looking to korokke (deep fried potato-based patty), it is said to have derived from Tsunehachi-san, the father of Teruo Osawa, the primary caretaker of an “ippukujaya” (tea house where people could rest) while on service in the Russo-Japanese War, and used steamed vegetable buns in northeast China as a foundation.

It is not known where the name “jelly” came from, but it is said that they were exactly like the small Japanese gold coins used at the time (called “kozeni”), and “zeni fries” ended up turning into “jelly fries” (“zeri fries” in Japanese).  Jelly fries were already eaten in the latter half of the Meiji period, and are loved by locals as a snack.  One jelly fry costs about 100 yen. 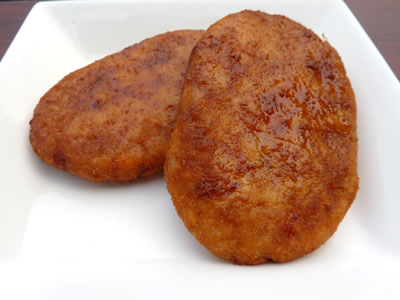